A dowry, or marriage portion, is a process whereby parental property is distributed to a daughter at her marriage rather than at the holder’s death. In England, failure to provide a customary, or agreed-upon, dowry could cause a marriage to be called off. Dowries have been an important part of society for thousands of years, going even back to the Roman times. It was a custom had amongst all the classes. By time the Victorian Era rolled around, marriages were no longer arranged, but were mostly made amongst similar if not identical classes. It was frowned upon to marry outside of one’s class.

For the upper and middle classes, dowries were viewed as an early payment of the daughter’s inheritance. The dowry was normally given in the form of money, and depending on the wealth of the family, a decent amount was normally given. For example, The 5th Duke of Devonshire, one of the richest men in the British kingdom, bestowed an enormous dowry of £30,000 on his eldest daughter. Another example is Lord Byron, who received a marriage settlement of £20,000 from the parents of Annabella Milbanke who, because of Byron’s extravagant lifestyle, still wasn’t as much of an heiress as he needed to wed. His manner of living had put him in debt more than £20,000—which is almost $6 million today. 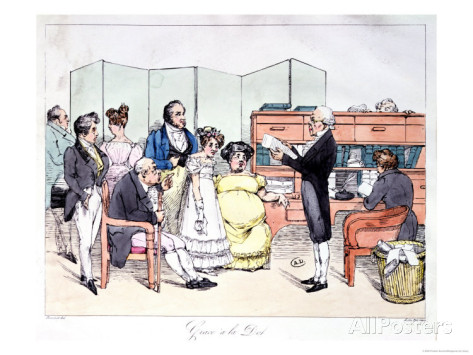 A caricature entitled “Reading the Marriage Contract”, circa 1830. Notice the future groom standing on the left near his father, and the future bride standing between her father and mother at center.

The size of the dowry was expected to be in direct proportion to the groom’s social status, thus making it virtually impossible for lower class women to marry into upper class families. It is recorded that in Roman times, some families would mortgage their house in order to provide a suitable dowry. Also, if a couple died without children, the woman’s dowry was returned to her family. This emphasized one particular reason why couples wanted children.

If a woman’s family was too poor to afford a dowry, the economic circumstance may have been forbidden her from ever marrying. One of her few options might be to become a mistress to a richer man who could afford to support a large household. Or, sometimes wealthy parishioners might provide dowries for poor young women of good reputation as a form of charity. Overall, dowries were a significant consideration for the marriage opportunities of a daughter, and for the marriage choices of a young gentleman.

For Latter-day Saints, Elder Jeffery R. Holland spoke of the special significance and relationship of the dowry and the endowment. He said “…the very word endowment conveys the essence of that vital link [covenants]. An endowment is a gift. It contains the same root word as dowry, which is a special gift to start a new couple on their married life.” Thus, an endowment in the temple is a gift to be received. When looking at dowries in the light of a special gift, it gives the concept a different meaning. Instead of being a monetary means of attracting a mate, it can be considered not only necessary for progress but sacred, and an honor to receive such a gift.